See if you can follow the logic in this one:

The Northwest Compass is a “new” publication recently launched in Prince Rupert. It seems linked to the old Northwest Weekly “spam” paper. It appears less spam-like than its predecessor.

One of the employees of the paper signs up on HTMF and posts a new topic to announce / discuss the new paper.

The Northern Compass is an attempt to duck creditors and legal troubles, nothing more. And, if you’ll notice, it didn’t have one decent local story that wasn’t already covered by other media. i doubt the Northwest Weekly will return, there are far too many law suits out there surrounding it including by competitors (former editor Bruce Lantz, etc.), employees, and god knows who else… Beyond which, the NWW was crap and a waste of trees… poor, poor trees…. nobody read it before, no one will now if it came back…

Yes, some former employees of NWW are indeed coming out with a weekly called LOOK INSIDE. They were in Terrace today to promote it.
I hope they run Rob Ritchie right out of the province. He is not trustworthy and he destroyed a lot of people. I don’t believe for a second that he can actually manage to revive what’s become the biggest publication joke in northern BC. His new “partner” is Bill Parmar and I am doing a dance of hope that Mr. Parmar will give Mr. Ritchie exactly what he deserves – three times over.

You can view the entire topic over on HTMF.

Anyway, there isn’t much of a response to this criticism, as it is mainly directed at the old Northwest Weekly Spam paper, not the new Northwest Compass. I even comment that “I haven’t seen the new one, so I can’t really say anything about it. But from the website, it does look more promising. Unlike the NWW, it doesn’t seem to have an ad-story ratio of 20:1.”

But here’s where it gets strange.

Along comes HTMF member SteveDVS. Steve is an amateur photographer and promising designer (visit his site for proof). Steve makes a comment about the Northwest Compass website:

– I read only a tiny bit of it and already found a spelling mistake.
– Horrible website
– Bad Ad Design

Hopefully it looks better in print. So far, it does look better than the gross NWW but it still doesn’t look as professional as the Terrace Standard or so many other publications out there. 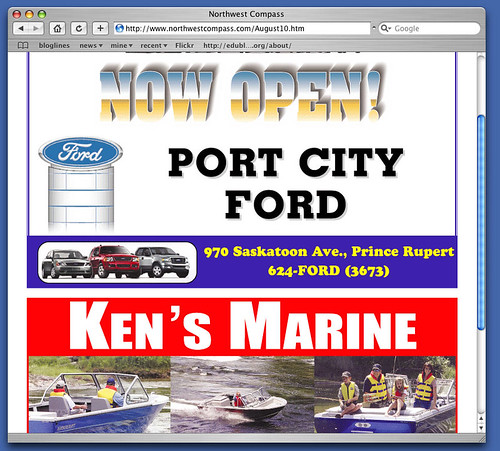 And he’s mainly right. The website does look like it was designed by somebody who read a “webpages for dummies” book in 1994. There are numerous spelling mistakes on the site. I’m not a designer, nor do I pretend to be, but even to my own untrained eyes, it looks like they purposely made it look ugly.

Well, if all the comments about the owners and employees of the Northwest Weekly didn’t draw any reaction, then Steve’s humble opinion certainly did. Instead of actually answering the criticism, though, Mr. Northwest Compass Employee attacks Steve instead:

Just what makes an 18 year old moron from Terrace, still living with his parents, an expert on design, photography, newspaper or anything else besides pimples?

Boy, how clever he must feel to have insulted somebody on the internet! His ad hominem attack validates Steve’s criticism. But it does more: Some have been insinuating that the Northwest Compass is run by a bunch of arrogant, ignorant and unskilled assholes. I’m not one to say this, of course, since I don’t know them. But I can only judge by the evidence that they may be right.

I mean, what kind of person insults his customers, makes fun of his audience, questions the intelligence of people in Terrace, all in the name of a new publication? Well, perhaps those who think the Northwest Compass is run by a bunch of arrogant, ignorant and unskilled assholes may be right.

They’re certainly not the smartest people in the world if they think it’s good business practice to post a link on a forum, and then proceed to abuse members of that forum.