I replaced Pam’s Macbook keyboard recently. It had an accident involving Xavi and some yogurt. A few of the keys on the left-hand side of the keyboard wouldn’t work. Also, after numerous yogurt and spaghetti-sauce spills, the whole thing was starting to look a bit yellow.

Xavi helped with the keyboard swap, and we followed the ifixit guide for the upper case nt. He was more interested in the magnetic screwdriver and the bubblewrap than the actual keyboard, though. 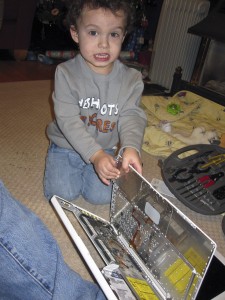 Here’s a photo comparing the old and the new keyboards. I think they’re actually made from a different kind of plastic as well. The top case including keyboard and trackpad were about $50 on eBay, and it took maybe 10 minutes to swap them. Would have been quicker if Xavier didn’t keep picking up all the screws with his magnet. 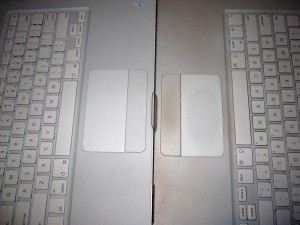